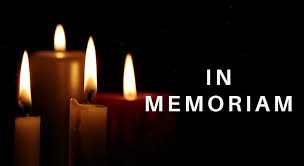 It is with great sadness that we announce the passing of three long time contributors to skating development in the BC/YK Section. Marie Dahl as a volunteer, June Thorlaksson as a coach and Ken Andrews as a volunteer.

Marie Dahl, a long time skating volunteer, passed away on September 18th, 2020. Marie was on the Board of Directors for both the Nelson SC and the Cheam SC. She was a volunteer with the BC Coast Region and was also on the BC/YK Section Board of Directors. Marie was the BC/YK Section Judges Chair and also volunteered as an Judge throughout the Section. Marie was often found at Competitions behind the registration desk or in the food room working alongside her close friend Carol Blackburn. Marie was an inspiration to her daughter Sharon Dahl in becoming an Data Specialist and giving back to the sport. Marie Dahl was eighty-one years old.

June Thorlaksson, a main-stay ice-dancing coach in the Vancouver area for fifty years passed away on September 19th, 2020 in England, her native country, due to a fall. June (Mann) Thorlaksson  came to Canada to the Winnipeg Winter Club in 1961 when she was 28 years old and later moved to Vancouver to teach at the Kerrisdale Skating Club, her early main venue. At Kerrisdale she served on the staff with Dr. Hellmut May, Faye (Strutt) Marshall, Jocelyn (Davidson) MacNiel and others. As a well-trained coach of the English school under coach Monty Readhead, June helped many competitive skaters in their careers and as well brought the pleasure of ice-dancing to adult skaters at Kerrisdale, the BC Centre of Excellence, and at many other Clubs. June made many friends with those she met through figure skating and they have missed her since her retirement in 2018, and all will mourn her passing. June Thorlaksson was eighty-seven years old.

Ken Andrews, a long time skating volunteer and official passed away on September 24, 2020. Ken was on the Glengarry Skating Club Board of Directors for over 20 years and was the founding member of the famed Ogopogo Competiton. He was computer accountant for entire volunteer career and also a gold level judge. Ken could be found volunteering at competitions alongside his wife, Connie, who was also a judge and an accountant. Ken was eight-three years old.

(Thank you to Ron Vincent for this background information on June.)